Couple gets Engaged at Star Party 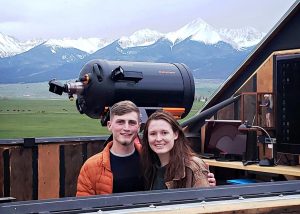 Love was in the air – and “in the stars” – at the Smokey Jack Observatory on May 22, 2019 when star guides, Courtney & Lin Miller, hosted a couple from Kentucky, Nick and Georgia. During the intermission, after discussing double stars and their gravitational bonding, Nick and Georgia slipped away to a bench outside the observatory where he proposed to her!

The young couple had known each other at the young ages of two and four. Their parents were good friends living in Kentucky. Both fathers were in the military, and the mothers were members of the wives’ club. They often had play dates. After that, they went their separate ways and lost track of each other. Last year, Georgia’s mother decided to make a trip to Kentucky to see friends, including Nick’s mother. She persuaded Georgia to accompany her. When they arrived at Nick’s, Georgia said she was shocked to see Nick all grown up and so handsome. Over the three-day visit, they reconnected and fell in love.

The engagement ring has been in Nick’s family for three generations. Courtney commented it sparkled brighter than any of the stars in the sky that night. They have vowed to return for an anniversary reunion someday. Here’s wishing Nick and Georgia great happiness in their future together as husband and wife.

Start planning your own romantic getaway under the stars by booking a private Star Party now, or attend one of the monthly public Star Parties.