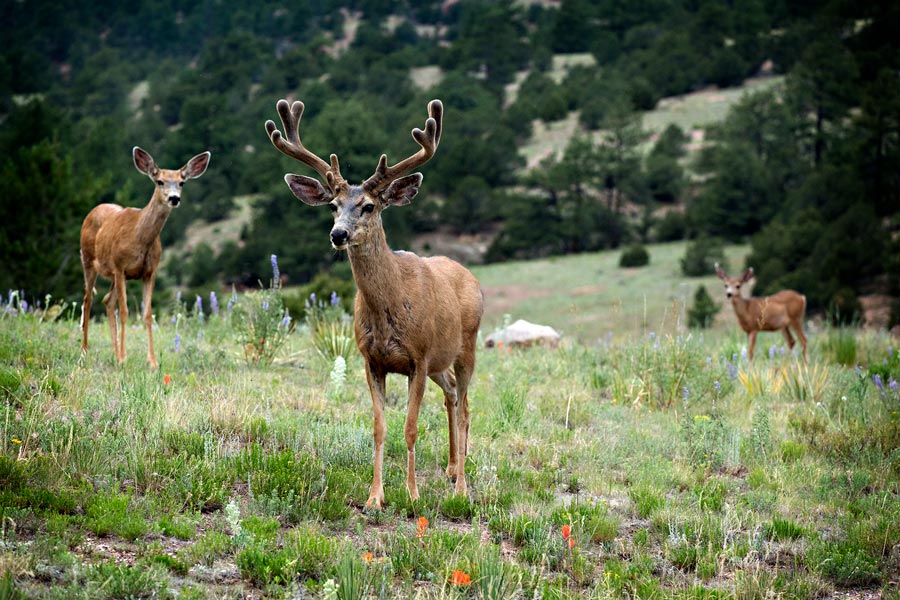 Encounters with wildlife inspire tall tales and long moments of wonder. Unfortunately, wildlife in Colorado face threats from loss and fragmentation of habitat, invasive species, pollution and disease. Protected lands offer a last refuge from some, but not all, of these problems. Wild animals need nature lovers like you who will encourage their survival rather than add to the difficulties they already face.

Because outdoor recreation occurs over large areas and at all times of the year, its impacts on wildlife can be equally widespread. Fish, birds and reptiles, as well as mammals, are affected by people recreating in their habitats. We are responsible for living peacefully with wildlife. Remember, we are visitors in their homes.

– Always watch or photograph animals from a safe distance to avoid startling them or forcing them to flee. Do not follow or approach them.

– Know your game if you are hunting and take only safe, clean shots.

– Use the observation areas, platforms and trails provided in many recreation areas, and bring binoculars, spotting scopes and telephoto lenses to watch wildlife.

– Back away if animals react to your presence.

– Avoid quick movements and direct eye contact with animals. These actions may be interpreted as aggression.

– Don’t disturb wildlife (e.g. shouting to get their attention) to get a better photo.

– Stay out of the line of travel of animals on the move.

– Travel quietly except in bear country, where the noise can deter them from coming near.

– Don’t hike at night, when nocturnal predators may present a hazard to safety.

– Show respect and restraint by teaching children not to approach, pet or feed wild animals.

– Don’t encircle or crowd wildlife, or tease and attempt to pick up a wild animal. Young animals, removed or touched by well-meaning people, may be abandoned by their parents.

– Notify a game warden if you find an animal in trouble. Often these animals are sick or injured and should be left alone to reduce the risk of spreading disease.

Avoid sensitive times and habitats. In some situations, avoiding wildlife habitats both for your safety and for the animals’ is the best plan. For example, Rocky Mountain bighorn sheep lamb in early June in craggy areas found at mid-elevations in the mountains. Moose hang out in the willows along streambeds at low elevations during the winter. Knowing these kinds of behaviors can help you plan your route to prevent stressful encounters with wildlife.

– Animals are most sensitive to disturbance:

– When pursuing and defending mates and territories

– When guarding young and nests

– When food is scarce

Never feed animals.
Feeding wildlife damages their health, alters natural behaviors, and exposes them to predators and other dangers. Headlines are made when wildlife is attracted to humans and their food. Bears get the most attention for tearing into tents, coolers and cars in search of a meal, but in reality, rodents and birds are probably going to be the wildlife you have the most interactions with while camping. These animals pose little threat to human safety, but their presence can be a nuisance, they can spread disease and their taste for human food is a harm to their own well-being.

Animals are adept opportunists. When offered the temptations of an untidy backcountry kitchen or a handout from a curious camper, they can overcome their natural wariness of humans. Aggressive or destructive behavior may follow, and in conflicts with humans, animals ultimately lose. Human foods and products are harmful to wildlife because they prevent animals from foraging and eating a nutritious diet. Prospects of an easy meal lure wildlife into hazardous areas such as campsites and trailheads or roads and entry points, where they may be chased by dogs or hit by vehicles. It may also cause them to congregate in unnatural numbers, increasing stress and the spread of disease within their populations.

To avoid attracting animals, keep a clean camp by picking up all garbage — even the tiniest food scraps — and carrying it out in a plastic bag. Be careful not to drop food on the trail as well. Appropriate storage and transportation methods vary considerably from place to place, so consult local rangers and land managers about the best practices.

Control your pet.
Wildlife and pets are not a good mix — even on a leash, dogs harass wildlife and disturb other visitors. A dog can frighten wildlife and distract wildlife from performing tasks vital to their survival, such as finding food. The best option, therefore, is to leave your dog at home. If you must travel with your pet, check for restrictions in advance. Most national parks prohibit dogs on all trails. Always use a collar and a short leash to control your dog. Remove pet poo from trails, picnic areas and campsites by disposing of it in a cat hole as you would human waste, or in a trash can.

Special considerations for bear country.
The chance to explore a wild place that is still inhabited by large predators is a special experience, but one that also comes with responsibility. As we head into those wild places for our own adventure, we need to recognize that we are entering the places a bear can call home. Our actions in these places can have a dramatic impact on the future of these animals.

Bears are opportunistic omnivores who follow their nose to the next meal. This skill has kept them fed, but it has also resulted in “problem bears,” or bears that associate humans with food. Once this association has been made, a bear is generally doomed. Most land managers give a bear two chances to reform, after that it is destroyed if it comes into someone’s camp looking for a handout. Bears are not cuddly, harmless pets. They have killed and mauled humans, sometimes without an understandable cause.

Black bears are most dangerous when surprised or threatened. Therefore, the first step to safety for bears and people is to avoid an unexpected encounter. Make noise when you are traveling in bear country, especially in spots where visibility is limited by vegetation. Travel in groups of three or more and stay close together. Watch for bear signs — tracks, scat, clawed trees, etc. If you smell an animal carcass, go out of your way to avoid it. Be particularly wary of a female with cubs. You don’t want to come between mama bear and her babies, or any bear and its dinner.

When you camp in bear country, separate your cooking area from the place you plan to sleep by at least 100 yards. Concentrate all odors in the cooking area. Do not bring food back to your tent. In some cases, you may even consider storing the clothes you cook in with food and other odorous items. Anything that smells should either be hung up overnight or stored in a bear-proof container. This includes toothpaste, soap and bug repellant.

Watch: How to Use a Bear Canister >>

Hang food from tree limbs 12 feet off the ground, 6 feet from the tree’s trunk and 6 feet below the supporting limb, or store it in specially designed bear-resistant canisters or on-site lockers. 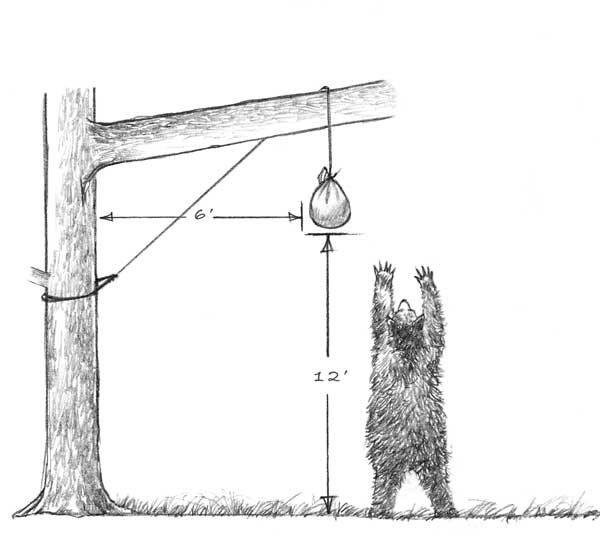 Another way you can do a bear hang is using the method often known as the Pacific Crest Trail method. Learn how to do a PCT bear hang.

Canisters are available for rent and sale at sporting goods suppliers and some land management agencies. Used properly, they ensure a good night’s sleep for you and a natural diet for bears. Hanging food can be tricky, so practice hanging techniques before venturing into the backcountry and allow yourself plenty of time before dark to get set up. Check with land managers about specific food-storage requirements for the area you are visiting. The various national forests and parks in the Colorado have different regulations. Methods appropriate for one area may not be allowed in another.

Around camp, be extra careful with food scraps and wash water — or anything that smells. Avoid creating leftovers because cooked food has a stronger scent than dried pasta, uncooked oatmeal or freeze-dried spaghetti in a sealed-foil package. Food scraps should be double-bagged, stored with your food and carried out of the mountains. Leave a clean campsite so that you don’t inadvertently endanger others who come behind you.

Disposing of wastewater in bear country is tricky. Once again, your main goal is to keep odors out of camp. Consider digging a small hole (6–8 inches deep) and a pouring your wastewater through a strainer into the hole. This practice concentrates odors in one safe location well away from your camp; however, animals may be attracted to the smell and dig up the hole in search of food. For this reason, sumping is not recommended in areas of high use. In these places, you should walk well away from camp and scatter your strained wastewater. Any food scraps strained from your wastewater should be put into your trash.

Make sure you are aware of the possibility of a bear encounter before you enter the woods. Call ahead and check with the land managers responsible for the place you plan to visit to find out if any bears inhabit the area. If so, ask if they have been causing problems or if there are any special regulations you should know about before leaving for your trip. You should also read up on what to do in case of an attack.

Learn more about how you can respect wildlife. 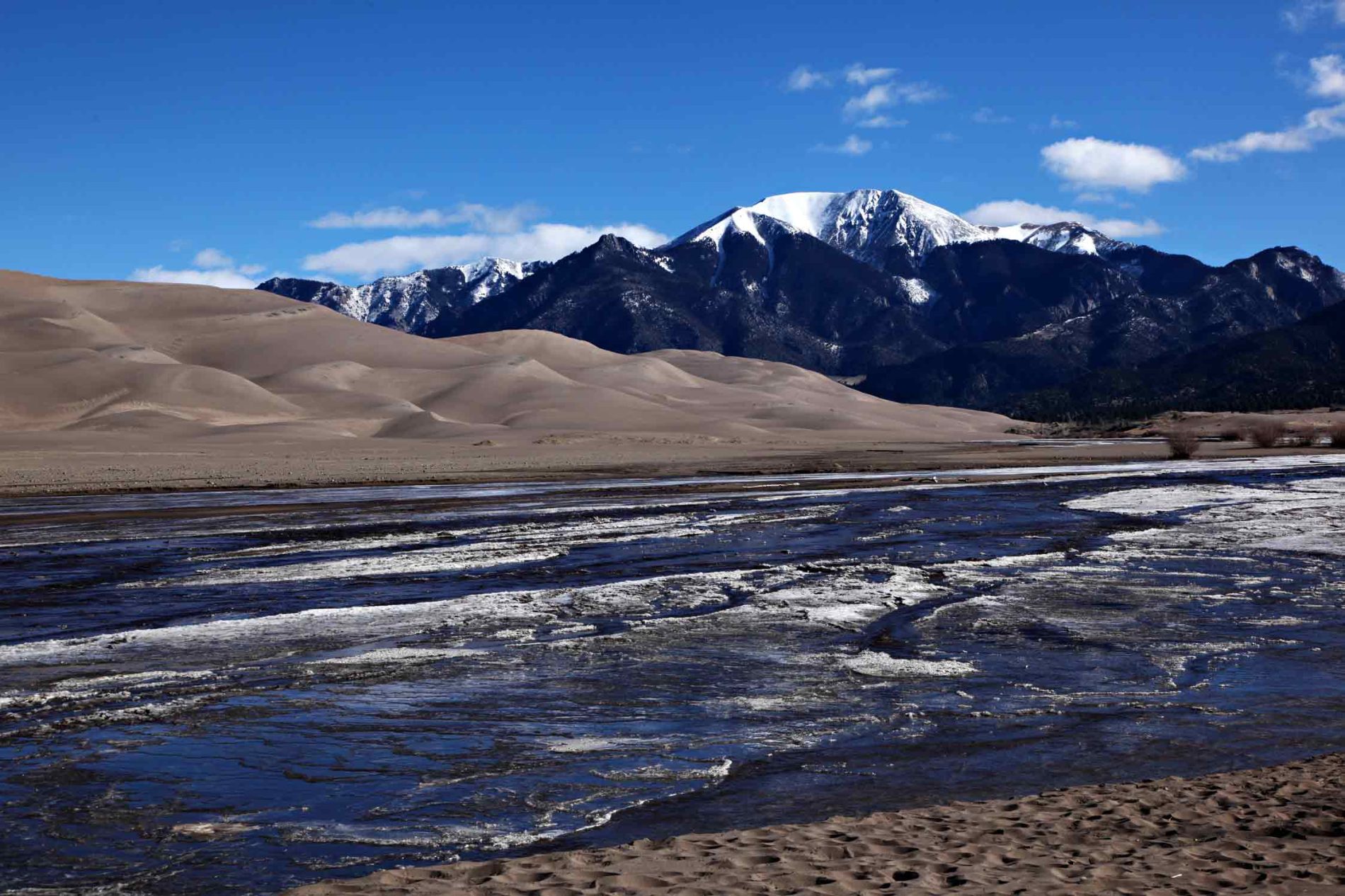